In The #Spotlight: Ulf Zetterberg CEO of SEAL In Conversation With High Performance Counsel 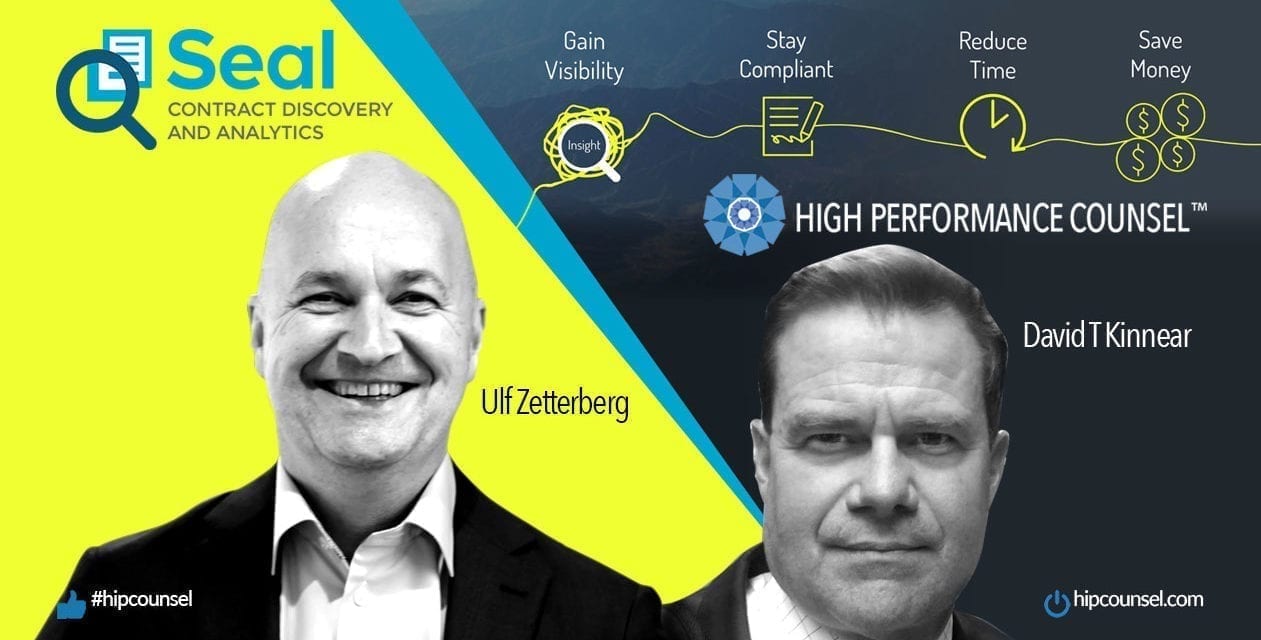 I met recently with co-founder & CEO of SEAL, Ulf Zetterberg. Our discussion in the quiet of Harvard Hall resulted from a client briefing in New York. These intimate conversations with top leaders in the legal space are one of the things I enjoy so much about life here at High Performance Counsel.

I was struck by his comments – and those of his colleagues – at the event they hosted. It was refreshing to hear commercial insight and realism making its way into both product and presentations – not simply legal spin. You couldn’t fail to see the face of the modern business of law that will change the landscape – and the tools that will be used to operate it.

Ulf presents confidently – but not arrogantly. With their existing success in the marketplace and accelerating presence, it would be easy to brag. That’s not his style. I found him to be very personable, focused. He’s astute about what’s coming in the legal industry, how it will connect and interact with other corporate disciplines – and how SEAL fits right in.

At High Performance Counsel, we run a #TopOfMind series – and I put the question to Ulf – what is top of mind for his leadership team in ’19. His answer was succint: “Data.” He continued: “Recent social media debacles have caused clients to scrutinize their data holdings and rules. They’re asking who has their data, who is using their data – and especially if they’re making money from it.”

Are we seeing the demise of the profession and the emergence of the business of law. Ulf speaks to the future of law and the “de-mystifying of law” for a much wider audience. He notes “the power of a knowledge management platform in connecting attorneys and other participants around data”.  Says Ulf: “What you capture you can leverage. Data (and the technology we have now) provides a new opportunity for lawyers to be more involved in the business.”

But as he also notes, the data has to be good. Good data in means good data out. This plays out especially in the noisy, growing arena of Artificial Intelligence (AI), which relies so heavily on data to fuel its success. Notes Ulf: “AI intimidates many people – and some of its present day utility may be over-stated.” Whereas consistent, reliable data – with or without interpretation – provides the working knowledge of countless organizations.

Knowledge Management may have less sex appeal than its AI counterpart but in his words, it is however: “Essential. The promise of AI is to interpret but that only highlights the necessity of good underlying data. Extracting core data reliably, consistently and transparently may be boring to some – but it’s essential to the outcome.”

We touched on the value of data itself. For many years, vast portions of legal data were simply off-limits with no technical or commercially viable means to tap the information within. That is changing rapidly. As extraction has become possible, organizations have started to appreciate the value of their data – both for their own purposes and, potentially, in aggregate sets – from which trends and themes can be observed. Notes Ulf, the latter issue is leading to “some interesting conversations in the industry about who owns the data and organizations becoming less willing to let others learn from their data set.”

Law is moving to a more integrated future. Says Ulf: “Corporate counsel see the need to integrate within the business – the silos are coming down and there is greater visiblity to the legal function. As the silo falls, so the opportunity arises (and the challenge) of demonstrating commercial alignment and value of the legal department to the business. These days “You can’t just stand on the sidelines.”

As an organization SEAL directs its efforts mainly toward corporate clients – it’s a natural fit with its technology focus and familiarity with corporate legal operations. Law firms are making progress in the adoption of technology – but it’s a slower pace. In the broader marketplace, Ulf sees and speaks to a “generational shift underway” – though, as we discussed, it’s more a circumstantial shift than one necessarily just driven by age. “For many legal professionals” he says, “the challenge is cultural.”

So what’s the #1 thing he hears from GCs in conversation? Ulf notes that corporate counsel are increasingly progressive in their thinking – there has been a noticeable pop in interest and activity in the last couple of years. On the list of hot topics, consider the following, which routinely come up:

The challenges to adoption of technology – and the pushbacks – are gradually lessening. The organization speaks to some great clients and perhaps those stories circulating in the marketplace will drive the peer comfort that buyers need to move forward.

“Can we turn the legal department into a profit center? Yes,” says Ulf.

Not surprisingly, SEAL’s strengths play well into the regulatory marketplace. Countless regulated organizations face increasingly complex demands for management of data, compliance. Says Ulf: “As demands increase, the budget to support them rarely increase in step. The need for technology to be able to automate and prioritize data activities touching Legal and Compliance is acute.” The kind of improvements SEAL’s technology brings to the table support growing corporate mandates for Speed, Accuracy and Compliance – and interaction with other parts of the enterprise.

In a nutshell, what’s the key take-away for a client – the “ah-hah”. Great technology, a ton of relevant experience in supporting major implementations. But what’s the thing they want to hear. Says Ulf: “We take away the noise.” To a busy corporate legal department, that’s essential. It lets them focus on the priorities – knowing the rest is happening in the background and reliably so.

Our conversation was wrapping up when some very jolly music started up over the speakers in Harvard Hall – perhaps a quirk of modern technology that someone’s bluetooth or wifi device had mistakenly connected to the system (though they were apparently unaware).

Ulf impressed me with his down-to-earth manner and his commercial eye for what is surely coming. Great things take time to build – but they’re invariably worth it in the end. It’s hard to imagine how ’19 and beyond won’t be very exciting for Ulf and his leadership at SEAL. The organization is clearly in good hands.

Ulf co-founded Seal Software in 2010 and drives the company’s overall strategy and execution. He brings over 25 years of enterprise software and services experience in both corporate and entrepreneurial environments. As a serial entrepreneur, Ulf is passionate about innovation and growth, and is driven by and committed to a strong customer-first culture. Prior to Seal, Ulf held senior executive positions at companies like OpenText, Legato, EMC, Kazeon and Proact. Ulf studied Economics at Stockholm University.

Seal Software is the leading provider of contract discovery, data extraction and analytics. With Seal’s machine learning and NLP technologies, companies can find contracts of any file type across their networks, quickly understand what risks or opportunities are hidden in their contracts and place them in a centralized repository. Based in the San Francisco Bay Area, Seal empowers enterprises around the world to maximize revenue opportunities, reduce costs, and mitigate risks associated with contractual documents, systems, and processes. For more information, visit Seal Software at seal-software.com.