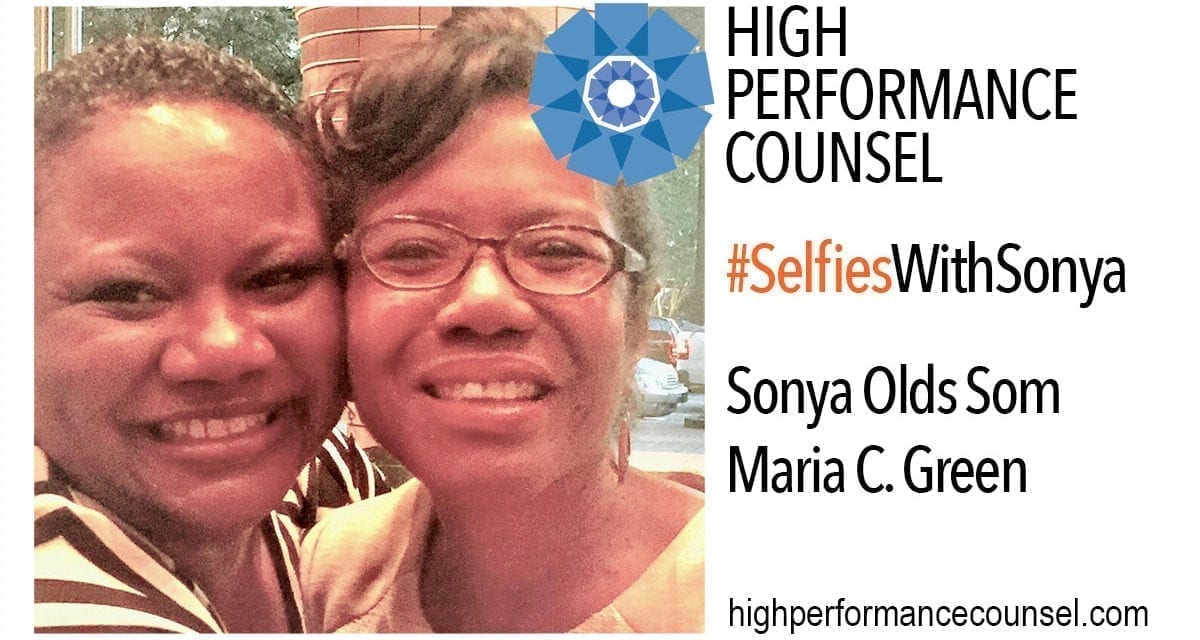 ” Diversity & Inclusion is important to me because I have seen first-hand that diverse teams are high performing teams that act as a critical differentiator for the business.”

Maria:  In the fifth grade, my school started a debate team.  I enjoyed research and writing and verbally advocating for my position.

I was pre-med but the labs ended so late that I would miss getting dinner in the dining hall so I switched my major to pre-law.

Being a part of the Executive Leadership Team that shapes the strategic direction of the Company.

Sonya: Have there been specific people (real or fictional) or pivotal situations/events that have inspired you, helped shape your career?

Maria:  I was primarily a real estate banking lawyer for the first 10 years of my career.  The GC at ITW hired me to be an M&A Lawyer; I loved it and was really good at it.  He took a huge chance because the company was very acquisitive and needed experienced M&A lawyers but it worked out well because I ultimately became the General Counsel.

Maria:  It is critically important to be an “active” listener; don’t just listen to the words being said but observe body language and other non-verbal cues, you can learn as much from what is not being said as you can from the verbal cues.

Sonya: What professional accomplishment are you most proud of? What would you like your legacy to be in your company/law department? In the legal profession?

Maria:  Creating a business savvy and efficient legal team who are viewed as proactive business partners.  Creating a level playing field for women and minorities.

Sonya: Have you had mentors/sponsors? Have you acted as a mentor/sponsor to others? Is mentorship/sponsorship important? How? Why?

Maria:  Yes/Yes.  To those whom much is given, much is expected.  We should lift as we climb.

Sonya: Think about the legal profession over the course of the next 10 years. What do you see as the big changes that are coming which you believe will most significantly impact the profession and the role of the GC/in-house legal department?

Maria: Artificial Intelligence will completely change the way we practice law.  Lawyers will not become obsolete but will need to focus on “high value” strategic work.  Routine tasks such as certain types of contract review, leases, etc. will be done by bots.

Sonya: Describe a significant challenge you have faced in your life or career. How did you overcome it? What did you learn from it?

Maria:  I had a critically ill child during my second year as an in-house lawyer.  Fortunately, I had hit the ground running my first year and built some goodwill so I was able to take the time off that I needed.  The critically ill child is now a 6’0, 190 lb. JAG officer who recently graduated from Michigan Law so it all turned out fine!

Sonya: What does Diversity & Inclusion mean to you? How important is D&I to you personally? As a GC? To your company/legal department? What advice do you have for GCs and others seeking to make a positive impact on the progress of D&I in their organizations and in the legal profession?

Maria: Diversity & Inclusion is important to me because I have seen first-hand that diverse teams are high performing teams that act as a critical differentiator for the business.

We still have a long way to go, there are still too many times that I am the only person of color in the board room or in an executive meeting.

Sonya: If you were not General Counsel of your company (or of any company or even a lawyer at all), what career do you think you would most like to pursue?

Maria: I would love to be the prima ballerina of the American Ballet Theater but Misty Copeland has more talent in her pinky finger than I have in my entire body!

Sonya: Knowing what you know now about being a lawyer and a GC, if you could give one piece of advice to your younger self, what would it be? At what point in your past would you give yourself that advice?

Maria: On my first day of law firm practice, I would tell myself to relax and don’t become paralyzed by the fear of making a mistake – rather visualize how you will react and repair once a mistake is made.

Sonya: Tell me something fun about yourself. A personal skill or hobby that, while not directly related to your day job, you feel makes you more well-rounded, helps you be better at your day job and/or helps relax and focus you to do your job as a GC better.

Maria:  I am a terrible driver.  I have had very nice cars but they all end up looking like “beaters” because of all the nicks and scratches I get when I try to park.  Fortunately, I never hit people or other cars but I have had many encounters with walls, concrete bumpers and garage doors.

Sonya: Hashtag/Brand yourself in 5 words or less (For example, mine is #SelfiesWithSonya )