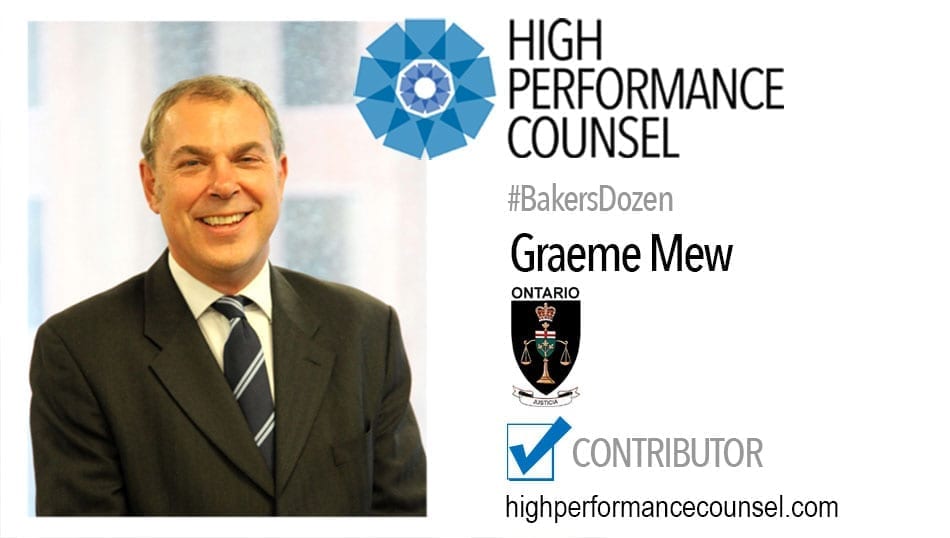 The Honourable Mr Justice Graeme Mew was appointed to the Ontario Superior Court of Justice in December 2013.

Tell us a bit about yourself and how you came to be in (or a customer of) the legal business?

I studied law in England and became a barrister there in 1982.  I went to Canada a year later to get some work experience and after going back and forth for a while eventually requalified in Ontario and settled in Toronto.  I practised civil litigation in several firms, eventually becoming the managing partner of what became the Toronto office of Clyde & Co. I was active in a number of legal organisations, including two years as President of the Commonwealth Lawyers Association. In December 2013 I became a federally-appointed judge of the Ontario Superior Court of Justice. I was initially assigned to preside in Toronto.  In July 2016 I moved to the East Region of the province of Ontario and have my chambers in Kingston.

What do you do for a living right now?

Superior Court Judge.  I’m on the senior trial court in Canada’s largest province, exercising civil, criminal and family jurisdiction. I also sit on the boards of the Ontario Superior Court Judges Association and the Sports Dispute Resolution Centre of Canada.

My greatest triumph as a lawyer was in a $750 million cross-border insurance coverage dispute when the Supreme Court of Canada refused to restrain my client from pursuing relief in a Canadian court despite the existence of parallel proceedings in the United States District Court (the case was Teck Cominco v. Lloyd’s Underwriters, 2009 SCC 11). It was a complete conflict of laws course in one case.  We had anti-suit injunctions, anti-anti-suit injunctions, choice of law and jurisdictional issues and much more.  We were constantly having to think outside the box.  But despite the high stakes and often fast-moving and aggressive tactical and procedural manoeuvres, the case was conducted with commendable civility on both sides of the border. My greatest experience – and thus success – before my appointment to the bench was to be asked to serve on the ad hoc panel of the Court of Arbitration for Sport at the London Olympic Games in 2012.  I learned a lot about making decisions quickly under pressure and in the glare of the world’s sports media.

Do you think the legal industry is headed in the right direction, the wrong direction – or which direction?

I am very concerned about justice becoming inaccessible to those without sufficient means to pay for lawyers and who do not qualify for support from public resources.  This is reflected by increasing numbers of self-represented litigants in our courts.

I’m inspired by lawyers who take on unpopular cases or causes and by judges who uphold the rule of law even when that means making unpopular decisions. In the Commonwealth Lawyers Association, we had members in places like Zimbabwe who every day faced the risk of arrest, imprisonment and personal violence just for doing their jobs.  I recently saw “Marshall” – the movie about Thurgood Marshall and the Spell case that he tried.  That’s the sort of inspiration I’m talking about.

What advice would you give to the younger generation contemplating law as a career?

I loved being a lawyer and I love being a judge.  Although neither of my children went into the law, I did not discourage them from doing so.  It’s a tough, competitive profession to get into.  It’s important for young people going into the law to appreciate that it’s more than a vehicle to making a living. It may be a business.  But it should also be a calling.  Be prepared to end up going in directions that you didn’t contemplate when you started out.  The good news is that a legal qualification opens many doors.  Not just the traditional practice of law.

How ready for change do you think the legal industry is?

Not as ready as it thinks it is.

Is more – or different – leadership required? In what ways?

I’m impressed with the new generation of law firm leaders.  I think they are generally more attuned to issues like work-life balance, client service, social responsibility and equity.  But while bar leaders talk the same talk, protectionist policies and attitudes still abound.

How deep do you think will be the inroads of technology in the industry?

Significant.  In litigation there will be increased use of online dispute resolution and accessing court services, including court appearances, through technology.  In other fields of law more automation is inevitable. I recently became aware of the Civil Resolution Tribunal in British Columbia.  Check it out.  It’s the way of the future: civilresolutionbc.ca

In ten years, do you see an industry much as it is – or do you see new players, new technology and an altered state?
Think back ten years and you have your answer.  We’ve only had iPads since 2010.  If anything, the pace of change increases.  So new technology for sure.  As for new players, the legal profession has been able to resist major changes for decades.  But that can only last so long.

Are consultants and lawyers looking increasingly similar? Should the distinction continue?

The overlaps increase.  But the existence of lawyer-client privilege is a valuable commodity.  As long as that continues to exist it will be important to be able to differentiate lawyers from consultants.

What are your thoughts on the increasing availability of data to guide client-side procurement of legal services?

As a lawyer I disliked it.  It is hard to measure true value.  Over-reliance on elements such as time spent, hourly rates and demanding things like flat rate or result-driven fees can diminish or eliminate consideration of other things that matter – such as expertise, reputation, ethical practice, loyalty, consistency, public service, core values. But I do understand from the client side why data-driven evaluation of legal services is so prevalent.  As with so many things, balance is required.  Procurement decisions should not be made on data alone. Personal factors should not be ignored.

Lawyers have typically regulated to keep non-lawyer investors out but that’s a two-edged sword these days. What are your thoughts?

It’s already happened in much of the common-law world outside of North America, with mixed results. In in Canada we’ve had multi-disciplinary partnerships for years and we’re likely to have non-lawyer ownership of law firms quite soon; I think the US will go the same way soon enough. I would be concerned if involvement of non-lawyer investors diminished the value and effect of privilege and the obligations of lawyers to put the interests of their clients and of the administration of justice above their own.

What’s the one most significant factor that will drive change in your view?

The squeeze.  At one end of the scale lawyers are pricing themselves out of the reach of ordinary citizens.  At the other end, much of the everyday work of lawyers has been demystified because of modern communications. Lawyers will have to maintain their relevance.

Are we seeing the demise of the “profession” and the real emergence of the “business” of law?

There has been a tension between these elements for some time now.  Although it is constantly under attack, I think professionalism is holding on.

What do you consider is the greatest challenge facing the industry?

Providing high-value service at a cost that adequately rewards the considerable investment required to become a good lawyer while keeping legal services affordable.

What do you see as the greatest opportunity for the sector looking forward?

There is much more creativity now in delivery of legal services. Unbundling of legal services, use of technology and the ability of lawyers to work outside of traditional office-bound bases offer massive opportunities.

Do you think law can improve its track record on diversity and inclusion? How?

In Ontario the benefits of encouraging diversity and enlightened migration policies and educational funding are now being seen.  I believe that the legal profession and the bench will reflect the diversity of the community within the next decade.  That said, in larger law firms, the challenge of retaining women and minorities through to partnership remains a challenge.

Will the current regulatory framework around law help or hinder it in the future?

Self-regulation of the profession remains the best option, but it is a privilege that must be discharged in the public interest.  Otherwise government will step it – as it has in England & Wales for example.

Who do you think are the greatest influencers on the industry these days?

If you had to do it all over again, would you? Or what would you do differently?

I might attempt a bit of fine tuning.  But I’ve been very lucky and have had a great career.  And hopefully I’m far from done yet.

If a law firm was a startup pitching for investors, would you be an investor?

That would be a conflict of interest.  But if I wasn’t a judge, I’d take a good look.

If you weren’t doing this, what would you be doing?

What would surprise everyone if they knew (they may now).

In 1980 I booked a little-known band called U-2 to play at my college in England. Just as they were becoming famous. And as a young lawyer I once appeared in Federal Court in Calgary representing George Lucas and Twentieth Century Fox in a copyright action involving “Return of the Jedi”.  I was suitably star-struck (pun intended).

What’s your favorite hobby or activity outside of law?

Consuming the occasional pint of good ale in rustic hostelries in far-flung corners of the British Isles.

That would be “favourite” (in Canada people speak US but spell UK).  Toronto FC.  The best football (soccer) team in North America

What’s your nickname – and why?

I’m not aware of having one.  Not sure if that’s good or bad!